Fritz has started using universal names for women, men, children, and babies. All women are named “Mommie.” All men are “Daddy.” All children are called “Ani.” And all babies are “Elaa” according to Fritz (Ella is my friend’s almost 8 month old).

Fritz absolutely loves Little Einsteins. That’s not the weird part. One of the times Jamie watched an episode of it with Fritz he noticed something strange about the opening.

There’s a close-up of the four kids in the rocket right at the very beginning and only one child is moving their mouth. Annie. But it’s not Annie’s voice singing. It is clearly just Quincy’s voice singing. So now every time we start a Little Einsteins it’s a bit weird to see a girl’s mouth moving and a boy’s voice singing. Oops.

Cameron lost not just his first tooth last night but his second as well!

When I just had Ani and Cameron, I hated the idea of a schedule. I like to do what I want to do when I want to do it. Once Fritz got close to toddlerhood I started thinking a schedule wouldn’t be so bad. Ani thrives on routine and basically begged me to make a schedule for her. I never thought I’d say it, but I am loving having a schedule. It makes our day go so much smoother when we follow it.

Now, granted, our schedule is not rigid by any means and Adrian’s column simply “Whatever he wants to do!” For the rest of us, there’s a lot of free time built in between our scheduled activities. The evening isn’t scheduled at all between dinner and bedtime routine.

I was wrong totally and completely wrong to think schedules were terrible, horrible things. Instead, our schedule has made such a difference that now I actually enjoy checking the schedule sticky-tacked to our wall to see what comes next.

I’ve always avoided dollar stores. Maybe it’s because of two in the town where I grew up. They were both nasty, junky, and sold stuff not even worth the $1 you’d pay for it. So even though I’d been told the relatively new Dollar Tree by us was quite nice I wouldn’t go there.

On Saturday I decided to check the place out. I had heard they sell teacher’s supplies and there were a few things I need that I wanted to see if they had. So in I went and I can honestly say I was wrong. The place is nice and while they do carry some of the junk like the others, most of their stuff was great.

I ended up buying a few things I needed for school, most of which I was surprised to find there (and delighted, too, since it was much cheaper than I’d pay at Staples or Target). I’ll be going back I am sure. Ani and Cameron are thrilled by that news. They love dollar stores.

Fritz loved being in the sling. He started out in the Peanut Shell. 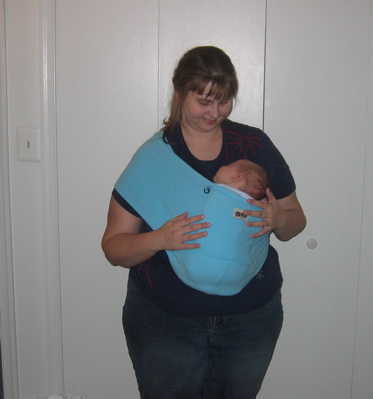 Adrian, however, gets overheated and very sweaty very easily. Because of that he’s okay in the sling while he’s sleeping, but as soon as he’s awake he wants out. He despises the Peanut Shell. He’ll tolerate the Moby Wrap as long as when I’m sitting down I pull the material down and to the side so he is cooler. He’s fine in the Ergo as long as I’m moving. Cameron didn’t like being in the sling either. Ani was like Fritz and loved it.

Not liking the sling made doing school a little more tricky. Holding him in my arms is difficult while simultaneously holding a book or playing sight word bingo with Cameron or whatever. So I decided to try bringing the cradle downstairs to our school room and sticking him in there while we do school. And wouldn’t you know it, he LOVES it! He sleeps in that cradle right through the two or so hours of school every day. 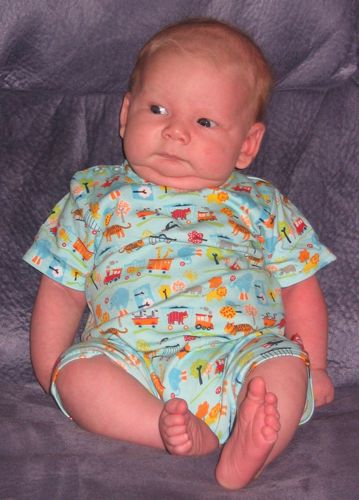 Our church has a lot of rules. No smoking, no drinking, no tobacco, no coffee, no tea, no sex outside of a legal marriage, attend church weekly for 3 full hours, tithe 10% of our income to the church, and the list goes on.

So why do we, as church members, obey those rules? The reason is two-fold. One, we are told to. And two, because we love the Lord and wish to do as he wants us to do. I suppose actually there is a third reason. We are happy when we follow the rules.

Some time ago there was an ad with a baby making the funniest face. I don’t remember if it was a print ad or an television one. I don’t even remember what it was for. But the gist was the baby had a fever and they were going to take his temperature with a rectal thermometer.

So the other day I took a picture of Adrian and his expression reminds me so much of that baby’s in that ad. I call it the “scared face.” 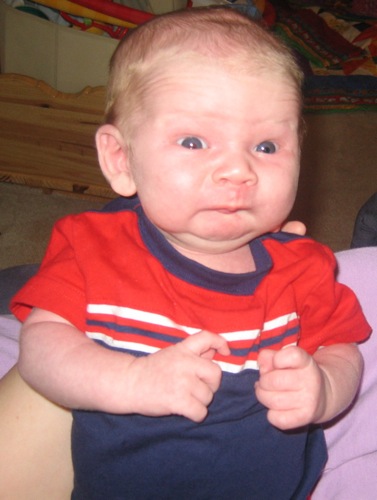 Smaller on the Outside
Blog at WordPress.com.
Loading Comments...