Ani made bread the evening of the 27th. Fritz spilled a couple handfuls of flour. They wanted to play in it, no big deal. That would be easy to clean up.

Next thing I know I discovered they had added more flour to the pile. Half of a newly opened 25 pound bag of it!

Now we’re talking about something so not easy to clean up. It was a mess! The whole downstairs had a thin layer of flour everywhere. 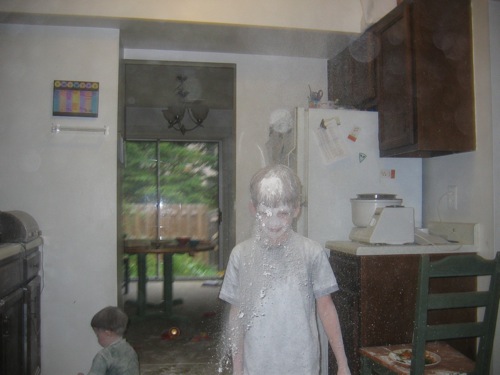 So the next day I canceled school and the kids helped me clean the whole house. It took 2 1/2 hours for the kitchen alone. The rest of the house took about 4 hours. I think they would have preferred to do school.

I also deducted $2.50 from each of their allowances (the cost of half a 25 pound bag of flour). They learned their lesson though. Ani said she learned to think before she acts. Good lesson I think.