Seriously, Girl Scout cookies have got to be laced with crack or something. You open a package and eat one and suddenly you’ve eaten 12… or the whole package. Good thing they only come out once a year!

Every girl’s first love is her Daddy so of course it would make sense that Ani’s first date was with her father.

The 8-11 year old Activity Days girls at church had a Daddy-Daughter Dance Date Friday night. Ani wanted to go so badly that she convinced us to leave Virginia Beach a day early (we didn’t have to check out until Saturday morning). She also convinced me (much to her surprise) to let her wear a touch of brown eyeshadow.

Ani and Jamie had a good time. They played some games, had spaghetti for dinner, and then danced. Ani came home exhausted (she kept telling us it was all the way until 9 pm – normally her bedtime) but so, so happy.

She was a very happy baby. She nursed until she was 3 1/2. When she weaned, she said to me “Thank you for nursing me so long, but I am done now.”

She was speaking in complete sentences by 18 months that were completely understandable by strangers. People were always kind of freaked out by that since she was so small.

In primary they spotlight random kids sometimes. She once wrote on her paper that the location where she was born was a hospital. For her that is significant since she’s the only one of her siblings who was. 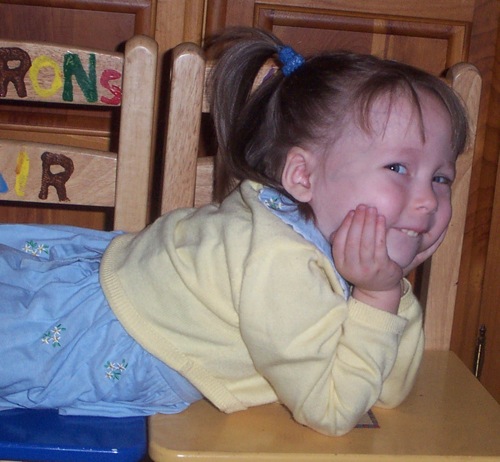 She has always been a tiny little thing. She wore 0-3 month clothes until I got bored of them when she was 7 months. Then she wore 6-9 month clothes (with feet!) until she was 2.

Speaking of clothes, she had one incredible wardrobe as a baby. I made some of her clothes and the rest I got way cheap off eBay.

She has always been an intense child. She tells us we ruined her life by having Cameron, but then I think she’d go crazy without her younger brothers around.

She has a special bond with Fritz. His first word was “Ani” and it’s no wonder. She spent hours trying to get him to say it when he was tiny. 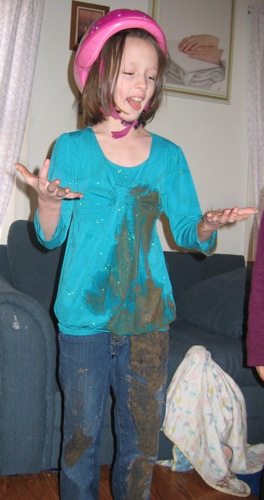 Happy ninth birthday, sweet Ani. We love you and sure are glad to have you around. 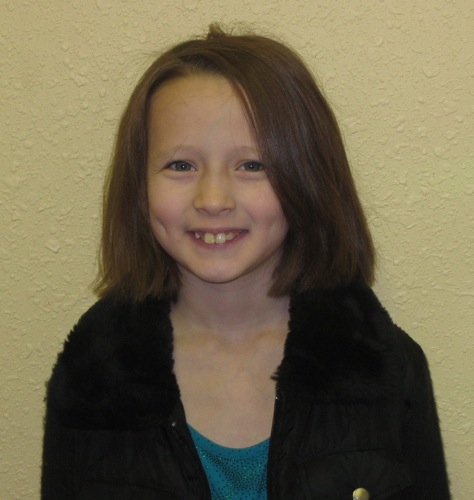 I love how little ones pick up on folding arms and bowing head for prayers. Nearly a year ago Fritz began to do it on his own without always needing to be reminded. Since he can repeat what we say pretty well, he has been added to our regular rotation of saying prayers (we go in order oldest to youngest – skipping Adrian – for simplicity).

We keep Fritz’s prayers very short. Otherwise he’d wander off in the middle. He is so proud of being able to join the family in saying the prayer sometimes, though he does occasionally make us laugh like when he looks at us and says “no” when, clearly, we have prompted him to say something he doesn’t want to or when he says “in a minute” and grabs a bit of the food on his plate in an attempt to quickly eat a little before finishing his prayers. 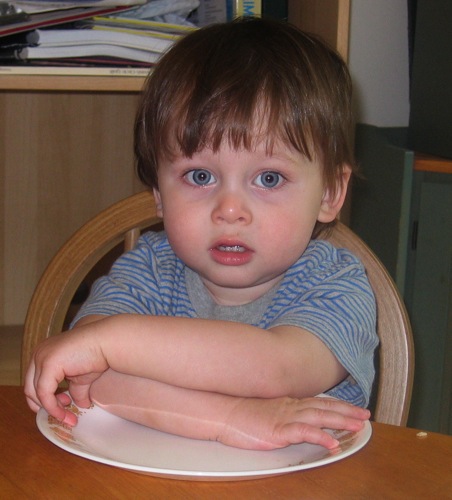 Even with the occasional not quite right prayer, it has been fun to see him join in with us praying. He’s learning how to do it and before we know it, he’ll be saying them all on his own like his big siblings.

In art this week the kids had to write stories and then illustrate them in preparation for assembling them into book form. Here are the stories the kids came up with.

Once upon a time, there was a family of Miis. They loved to play sports. One day they all competed against each other in tennis. The scores were close. They kept being in a deuce. Finally, the team of Ani and Daddy won, beating the team of Cameron and Mommie. Cameron and Mommie challenged Ani and Daddy to a rematch. The Mii family lived happily ever after playing sports together.

Once there were three monsters. Now, these monsters were very friendly. All the kids loved to play with them, though the parents did not. One parent had a sword he always had with him all the time. The monsters and children wanted to play a trick on him. They closed in on him. He drew his sword and said, “Stay back. I’m warning you!” They all started to laugh. Soon they made friends and lived happily ever after.

I have always been resistant to getting a video game system. I prefer my kids to be moving around playing. We limit their computer time to an hour a day because of that. I envisioned them sitting playing video games and becoming couch potatoes.

A few weeks ago we decided that getting a Wii sounded like a good idea. Particularly with the addition of a Wii Fit (which we have not bought yet) we figured the kids could have fun and be active and maybe even get a little PE in all at the same time.

So we saved for a few weeks. The kids kicked in their Christmas gift cards to Toys R Us my aunt gave them. They even contributed some of their allowance money to the Wii fund. It took 6 or 7 weeks, but we got our Wii.

And I have been very pleasantly surprised. We only have the Wii Sports game it came with, but we are all having a ball with it. I never realized just how active a video game system could get you to be.

Most surprising of all is that I love it, too. I have a great time playing tennis and bowling. I am surprisingly good at golf. I haven’t tried boxing or baseball yet. For the first couple days I was actually sore from playing with the Wii. It’s an amazingly good workout! I’m really glad we decided to get it and can’t wait to save up enough to get more remotes (so all four of us can play tennis at one time) and the Wii Fit. And maybe another game or two, too.

On Saturday we went to the Pompeii and the Roman Villa exhibit at the National Gallery of Art in DC. We just started learning about Rome in school so it was just perfect. It’s amazing to see things that are so incredibly old out on display. They had free Discovery Guides available (one for kids 7-12 and one for high schoolers). We used the children’s one as we went through the exhibit. We got to learn a little extra about various displays and it had some questions to get the kids thinking about the things they were seeing. It really added a nice additional bit to our visit. (There are no pictures of the artifacts because they requested that none be taken.) 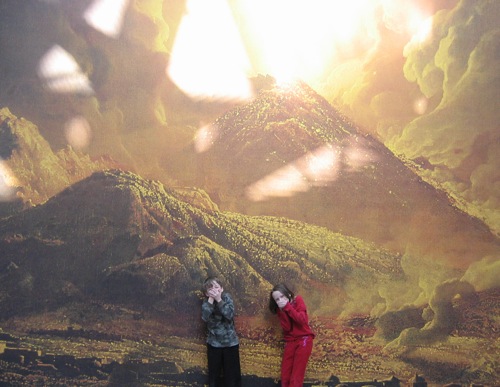 In one small area there was a huge picture of Mount Vesuvius erupting in the 1800s (the one the kids are standing in front of above is not that one; this one was outside the exhibit). Cameron stood in front of it and demonstrated what happened to the Pompeiians back in 79 AD. He covered his nose and mouth with his hand and then fell over onto the floor. A man walking by laughed and said “Yes, that’s about right.”

And, of course, no trip to DC is complete without the obligatory Metro pictures. Sometimes I think riding on the Metro is the highlight of the trip.

We discovered it was easier to put Fritz in the stroller and for Jamie to carry Adrian some of the time. Fritz likes to run away. We had a 7 minute wait for the yellow line train at the Pentagon City stop. I told Fritz to put his hands behind his head and relax. I was quite amused when he actually did it.

Metro Surfing, the ever popular sport. The kids (and Jamie) like to practice their balancing as the Metro train moves along. We discovered that the newer trains are much smoother making Metro Surfing much easier, but a lot less exciting.

A few years ago Cameron had several warts on his feet. All the home remedies failed to get rid of them. I read in a church magazine about a girl who prayed for her warts to go away and they did so we decided to start praying as a family for Cameron’s warts to go away. Within a month or two, they were gone.

Meanwhile, Ani had a few warts as well. She liked her warts and so refused to pray that they would go away. Over time she has decided she doesn’t like them after all. Home remedies haven’t worked and even having the doctor freeze off some of them did not work. So we started praying as a family that the warts would leave our family forever (even Fritz had developed a small one).

Fritz’s wart has disappeared. Ani’s warts are starting to fall off. She is always thrilled to tell me another one came off which means our prayers are being answered. This is a big thing because Ani has said in the past that Heavenly Father doesn’t answer her prayers. It’s pretty cool to see that yes, He does indeed answer her prayers, even for something as non-spiritual as a bunch of warts. The growth of her testimony from this has been wonderful to watch. 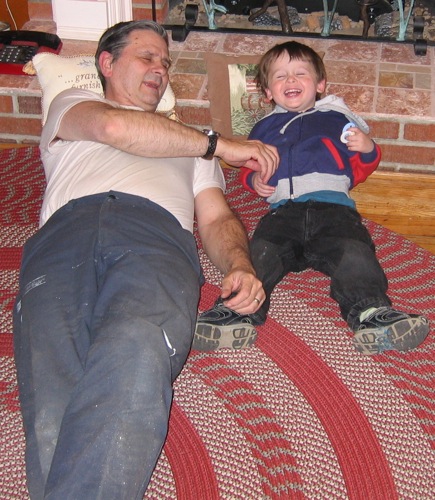