We cleaned off the buffet yesterday and decided it was time to change the table runner to something other than the Christmas one that had been on it for a couple months. Ani wondered if there was a Valentine’s one. My mom said there was not, though she had planned for some time to make one. So Ani asked if she could make one.

Off to the craft room Ani went to pick out pink and red fat quarters. My mom showed Ani how to cut the fat quarters into pieces to sew together. And then she sat Ani at the sewing machine and set her to work sewing the new table runner. 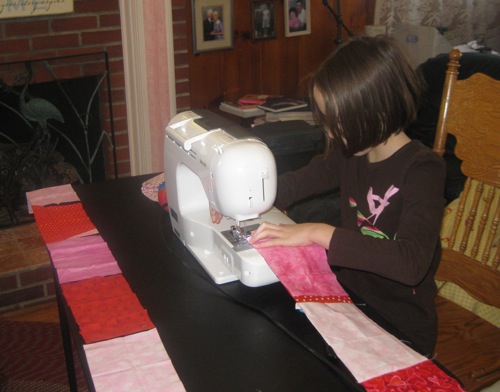 Ani worked off an on for a few hours over the course of the day. She watched Nim’s Island and The R.M. while she worked. By mid-afternoon she was all done. My mom had only helped with cutting, ironing, and a tiny bit of the sewing. At least 90% was all Ani! She was thrilled with her work. It looks great on the buffet.