At 9:52 yesterday morning our boxes from Calvert School were on the FedEx truck for delivery. Being the box stalker I am (oh, how I wish those trucks were trackable as they drive around making deliveries), I checked it several times as the day wore on and, sure enough, at 6 it was changed to “delivery exception.” Delivery was rescheduled for today and it said the reason was “local weather.” Except of course we had lovely weather yesterday. And this is the second time our FedEx guy has not delivered as scheduled due to a made up reason.

So I called FedEx to complain. The nice lady I talked to put me on hold and called the depot and told them the boxes were to be delivered during the morning hours (usually they don’t deliver here until 7 or later) and she filed a quality complaint. So imagine my surprise when the FedEx truck drove up at nearly 9 pm to deliver our boxes. Guess someone got chewed out.

Cameron happily pulled out his pocket knife to help me open his box of second grade things. His box was full of awesome stuff. And the other box was full of the enrichment items I ordered. 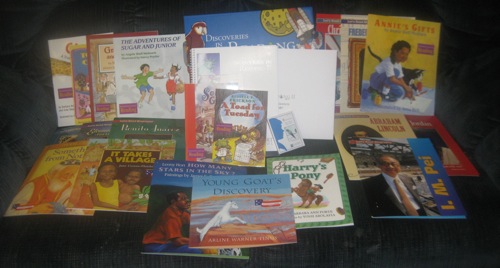 Discoveries in Reading 2 in a nice storage box to hold the books
lesson manual with activities and a card to mail in when he completes all the books to get a reward, a map and stickers to mark his progress through the books, crayons, and 20 books: Solo Girl, A Toad for Tuesday, Something from Nothing, Chibi, Grandaddy and Janetta, It Takes a Village, Benito Juarez, Eleanor Roosevelt: First Lady of the World, Benjamin Franklin, Young Goat’s Discovery, Harry’s Pony, How Many Stars in the Sky?, Annie’s Gifts, Frederick Douglass, Christa McAuliffe, I.M. Pei, Abraham Lincoln, The Adventures of Sugar and Junior, Tonight is Carnaval, and Barbara Jordan

Discoveries in Early Reading
This used to be called Come Read With Me back when we used Calvert with Ani. In fact, that’s what Ani learned to read using. I wasn’t going to get this, but Ani has such fond memories of it and Fritz really wants to learn to read, so I got it. We’ll see if it works as well with him as it did with her.
40 lessons on 3 DVDs (we had them on VHS tapes back in 2004!), Me? A Mess? book, Nik and Dilsey finger puppets, yarn, activity workbook, two pencils, pencil sharpener, guidebook, pad of newsprint, pack of construction paper (100 sheets)

Writing Fun (for Ani and Cameron to learn Calvert Script)
lesson manual, workbook, pack of four pencils and a sharpener (not pictured), and a big pad of newsprint 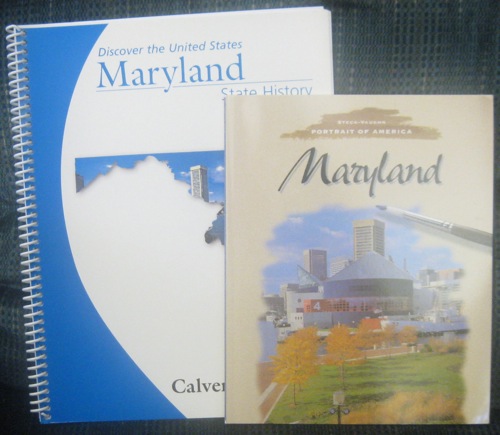 We’ve already done three or four lessons of Writing Fun, two lessons of Gods of Greece, and one lesson of Maryland History. So much fun! And Ani is thrilled to be doing “real” school because, apparently, Download N Go alone is just nowhere near enough to make her happy. Even in the summer.