For Thanksgiving dinner we went to Golden Corral. That’s nothing new. For the last several years we’ve either gone out to eat or gotten one of those pre-made meals from the grocery store. What was different is one day I randomly told the little boys they could have dessert first. Why not? It was Thanksgiving.

Adrian got very excited about that. He talked and talked about how he’d have dessert first. And, sure enough, as soon as we sat down he was ready for his dessert (he chose 6 marshmallows, 2 each dipped in chocolate, white chocolate, and caramel).

He’s already made plans with my mom to eat dessert first on Thanksgiving next year. Guess I accidentally started a tradition!

Over the last couple months, Cameron was tested by a school psychologist. They like to repeat testing every three years and it had been almost three years since he was first tested, plus we are now in another school district in another state and he is attending public school. I got the results on Friday (and next week, after the Thanksgiving holidays are over, we’ll put together his 504).

The psychologist was fascinated by Cameron. She had only encountered one child like him before, many years ago while she was still doing her training. She said she did a lot of research to get the perfect diagnosis for him. He’s not exactly dyslexic and dysgraphic like we thought. Still, those are the easy explanation of what’s going on with him. What he actually has is an orthographic processing disorder. And he’s divergent (I suspect the psychologist has never read the Divergent series because she seemed a little confused by my excitement over that part of his results).

First of all, Cameron is universally loved by his teachers. His English teacher said she admires his determination and work ethic. His math teacher actually said Cameron doesn’t socialize much and this is a negative thing. His debate teacher said he has a great attitude and always puts his best foot forward. His inclusion teacher said he is an impressive young man with a nice sense of humor and is more mature than his peers. The psychologist really enjoyed testing him. She found him to be delightful and noticed that even on sections (reading and writing) that took way longer than they should have, he tried very hard and didn’t give up.

The majority of his IQ test scores are in the 100+ range with most being in the 120s and 130s and some in the 140s. His highest score was auditory processing. He scored a 148 on that part of the test. We’ve always known he is extremely auditory. Then he had some ridiculously low (for him) scores. He got an 83 on the short term memory subtest of reversing and repeating back numbers. He got in the low 90s for every subtest on processing speed.

And that is why he is divergent. These low scores are very unexpected based on the majority of his scores being so much higher. Those unexpected low scores also impact his overall IQ. The psychologist said he is brilliant and it is unfair that he has to work so hard to read and write because a part of his brain doesn’t work properly. Given the majority of his scores, he should be able to do everything academic super easily.

So he’s a conundrum. In most kids, where 100 is average and you want to see scores in the 85-115 range, 84 or below indicates a deficit. Cameron rarely scores below 85, but given his much higher than 100 scores, for him a score indicating a deficit is 95 or below. So then she administered another test (CTOPP) to try to zero in on what exactly his problem is.

He did fine on most of the first few parts of that test (memory for digits was the only problem), but then she got to the rapid digit naming and rapid letter naming subtests. This tests long term memory storage to see if he can call up what something is quickly on sight. The answer to that is no. He got a 16th percentile on rapid digit naming and a 25th percentile on rapid letter naming. The test put his overall rapid symbolic naming at 16th percentile with a standard score of 85. Since 95 or below indicates a deficit for Cameron, this told her he has a RAN (rapid symbolic naming) deficit.

The last test she administered was the Woodcock-Johnson III Tests of Achievement. She noted that in the reading and writing portions he took much, much longer than average to complete them. Almost all of his scores in reading and writing were below average. His lowest score was 2nd percentile on the spelling of sounds subtest. His reading fluency was only in the 7th percentile. However, his reading comprehension was in the 66th percentile. She was amazed at how poorly he read versus how well he understood what he read. He got a 13th percentile on written expression and 15th percentile on writing fluency. He did very well on the math portion of the test (only had trouble with stuff he has not yet encountered in math class) with the exception of math fluency. He only got an 8th percentile on that one. He struggles with word problems (because of the reading) and works very slowly. Since math fluency was a timed test he didn’t get to as many problems as is expected for his age.

End result is he does have a specific learning disability. He is able to make reasonable progress with certain modifications and accommodations in the regular classroom (and so everything should be able to be covered by a 504). She recommended that he be given more time to complete assigned reading or possibly instead of being assigned a certain number of pages to read, have him read a set time and record the number of pages he was able to read and only test him on those. I’ve taken him to morning coaching to get extra time to read short stories in Reading. He may be able to bring a copy of the short stories home to read even though technically they are supposed to stay in the classroom. Finishing his reading in AIM (which is like study hall on steroids) is also a possibility. He should get extended time for tests and assignments, not be penalized for spelling (his teachers already do that), allow him to type instead of write assignments, listen to audiobooks or have a peer reader instead of always physically reading himself, and allow him to use speech to text software.

So what exactly is this orthographic processing disorder the psychologist diagnosed him with? When most people read, they instantly recall on sight from somewhere in their long term memory what words and parts of words are. The same thing happens when writing words. We do it automatically. We don’t have to think about it and we don’t know it is happening. Have you ever written a word and looked at it and said to yourself, “That doesn’t look right” and tried again? That’s orthographic processing at work. You don’t consciously realize this is happening.

For some reason, the part of the brain that does all that just doesn’t work properly for Cameron. This is why it took him 6 months to learn to read the word “the” and why he sounds out most of the words he reads and doesn’t remember them for recall later. This is why he spells words differently on different days and even later on the same day. This is why his reading and writing require exhausting effort. This is why he works incredibly slowly when doing anything written (while orally he speeds through things). This is why learning his math facts took serious effort for the ones he did learn and just didn’t happen for most of them. This is why no matter how much practice he has reading, he will never learn to read quite as fluently as most people.

Cameron really is having a lot of success in school and with the accommodations he should have even more success. This quarter the only grades he had below A’s so far is in math (big problem there is properly showing his work… the only trouble is he doesn’t know what to show because he can just solve some problems in his head… plus ratios really made little sense to him) and reading (two very low grades because he simply didn’t have time to finish the reading really messed up his grade this quarter). The psychologist is right. It really is unfair that this super smart kid struggles so much in things that really are required for everything in life. But, then again, Cameron thinks that because of his disability he works as hard as he does so he’s glad he has this orthographic processing disorder. He says it helps make him him.

A couple weeks ago we decided to sign the little guys up for taekwondo classes. We’re hoping it’ll help Adrian control himself a little better. As it turned out, the whole family could take classes for the same price as two kids, so Jamie, the three boys, and I are doing two classes a week. Ani has too much homework so she’s not participating at this point. 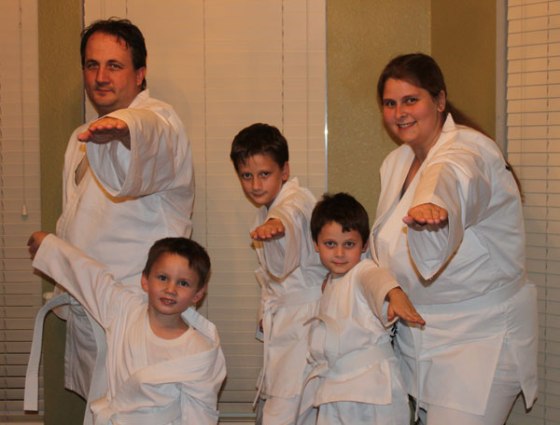 We are all so bad at it, but it’s really, really fun! Occasionally we’ll get the moves right and it’s just totally awesome. It’s really great exercise. I discovered some muscles I didn’t even know existed when they got sore after the first couple classes. 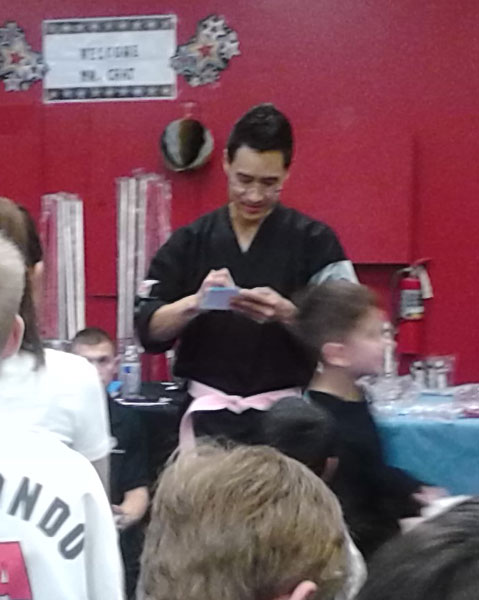 Friday Cameron, Fritz, and I got to participate in a master class by Mr. Chat who was the blue Power Ranger in the Lightspeed Rescue series (that was one when Ani was a newborn). Adrian had been super bad at school that day so he didn’t get to go and Jamie was out of town. It was a fun class and quite a workout, especially for us brand new white belts. 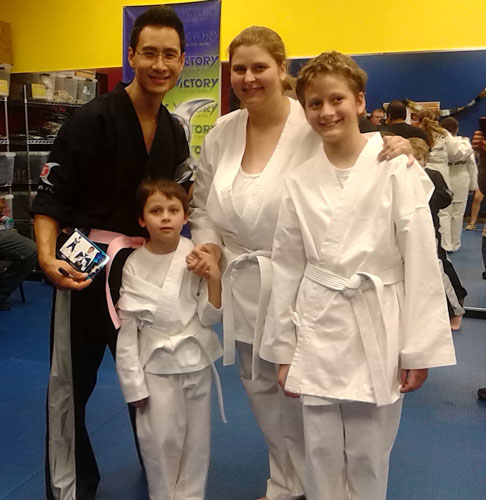 I’m glad we decided to take taekwondo. I’m enjoying it way more than I ever thought I would.

In a couple weeks the kindergarten classes will be having a Kindergarten Pow-Wow performance. They are learning Thanksgiving songs to sing. Yesterday Adrian kept singing the most recent one they learned, Five Fat Turkeys.

Time is flying. In just 8 weeks the kids will have completed half of a year of public school. They brought home their first quarter report cards Friday. Ani got all A’s and 3 B’s, Cameron got all A’s and 2 B’s, Fritz got all A’s (and E’s for excellent in the subjects that they don’t receive actual grades), and Adrian got all +’s in academic things and mostly /’s and -‘s in behavioral things. They’ve definitely settled into public school easily.

In October it actually got cold enough to put pants on the boys. Of course a few days later we were back to the 80s again.

Ani had to dress as an author for school one day. She went as Dylan Thomas. 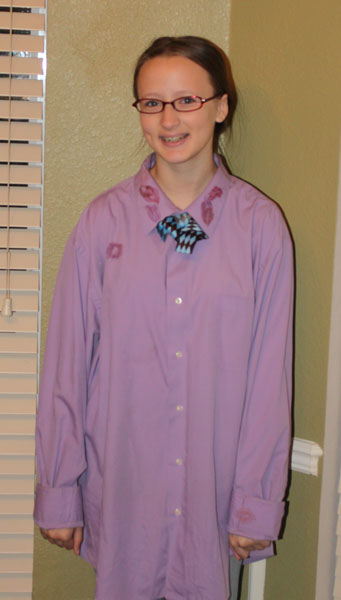 Adrian decorated an A since it is the first letter of his name. Almost half of the letters on the bulletin board were A’s. That’s a lot of A names in one kindergarten class!

The little guys dressed up as a Power Ranger and a Ninja for Halloween. 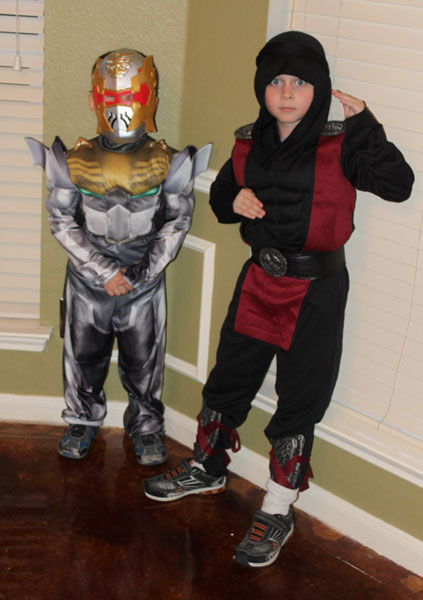