For a couple years now Adrian’s been learning to read. He’s been working hard at it and progressing well.

And then he turned 7.

Suddenly, he no longer needs phonics lessons. He is just reading. He recently asked to reading the first Magic Tree House book and is having no trouble with it at all.

My uncle always said they learned to read the first year of school (which was first grade back then) and within a year pretty much all the kids were reading, when they were 7. For the half year Adrian was in kindergarten, I watched his teacher struggle to teach the kids letters/sounds/sight words (most of the kids were not reading at all before starting school). The kids in Fritz’s 2nd grade class, however, were all reading fluently.

I think first grade/7 years old is magic somehow when it comes to reading for most kids without learning disabilities. It’s so fun to watch kids get to that point of, as Cameron called it when he was 6, “speed reading.” (Note I did not include Cameron when talking about my kids who took off with their reading at 7. Since he has dyslexia, I am not surprised it didn’t go that way for him. There were many red flags that he had that particular disability long before he turned 7.)

This week I had to make laundry detergent again. It’s pretty labor intensive, but once it’s done I don’t need to do it again for 15 or 16 months so it’s not so bad.

I last made detergent in March 2014. The first load using that batch was washed on March 23. We recorded every load of laundry for the last 16 months just so we could see how many loads that batch would wash. The answer? 260. 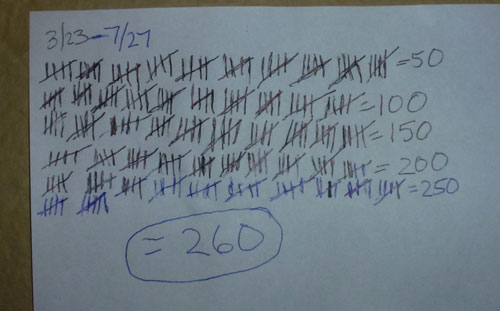 The ingredients for the batch last year cost $20.20. That means each load cost us 7.75 cents. That’s about half the price per load for cheap stuff at the grocery store (and this stuff works better!).

This time around I decided to put the Purex Crystals in again. They are totally necessary, but our clothes weren’t quite as soft. The scent doesn’t linger in the clothes after they are dried, but the softness does.

The addition of the Purex Crystals means we’ll get 40ish more loads out of it, so about 300 loads total. That means the cost per load with the Crystals will be about 10 cents. I’m not keeping track this time, though. The estimate will have to be good enough.

For the laundry detergent recipe, go here. To see pictures of me making the detergent step by step, go here (I whirred the soap in the Ninja longer this time so it was completely powdered with no bigger pieces at all; I put the ingredients into the buckets 1/3 at a time to make it easier to mix thoroughly; I discovered using a potato masher works fabulously to mix everything and also makes it easy to break up any lumps that have formed in the borax in the box). 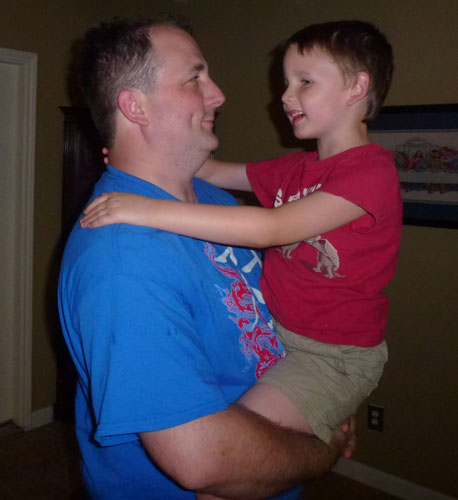 Last month I finished my 52nd book of the year, Les Miserables. I decided that reading a 1400 page book written in the 1860s deserved to be rewarded so I got a t-shirt from Litographs.

On the front is the Elephant of the Bastille with Gavroche and his two little brothers climbing into it.

On the back is a close-up of the three boys.

The design is made with actual words from the book.

I love this shirt. It is so soft and so unique. Definitely the perfect way to commemorate reading Les Mis!

A couple weeks ago Ani had Legacy training one night and instructor training another morning. She learned some partner drills with the new leadership weapon, kali sticks. She spent about 15 minutes teaching her father the first few moves. This is the result.

Ani is trying to get more flexible so her kicks will be higher. Some girls at taekwondo showed her some stretches she could use including this one.

You put your feet on the inside of the other person calves, clasp hands, and lean back. 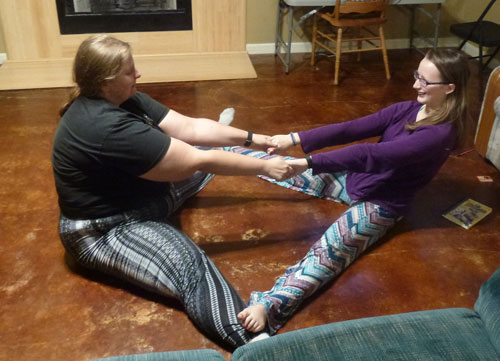 This pushes your feet forward giving the other person a nice inner thigh stretch.

It’s a bit painful, but it feels pretty good, too.

Nine years ago today, this amazing kid joined our family. 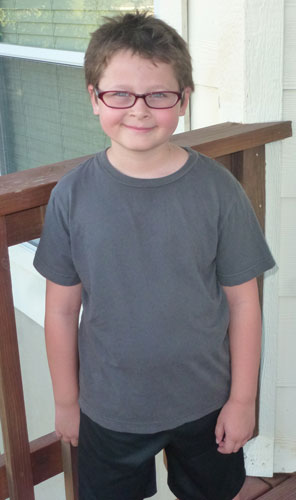 A basketball to go in a little hoop we have that hangs over doors, a Playmobil martial artist with a rebreakable board, B.C. Reinvents the Wheel (which he quickly started reading and giggling like crazy), The Game of Life, and Sequence (which got the biggest cheer). 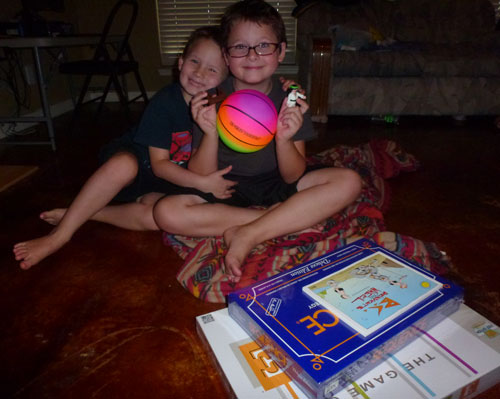 Ani has synesthesia. Letters have colors. Music has designs. Numbers have complete personalities. The number thing makes math hard for her because various numbers hate each other, are in relationships with each other, or a jealous of each other. The letter thing makes some names very ugly to her visually and other names beautiful. The music thing, though, can produce art. Classical music produces the strongest pictures in her brain.

The other night I played four pieces of music for her and had her draw what she saw in her mind. She said her drawings aren’t perfect. We need more pastel colored pencils for example. One picture she said wasn’t quite right because one color was completely surrounded by another and she couldn’t draw it two-dimensionally. But, as far as she could reproduce with the pencils we have, these are what the pieces look like to her. 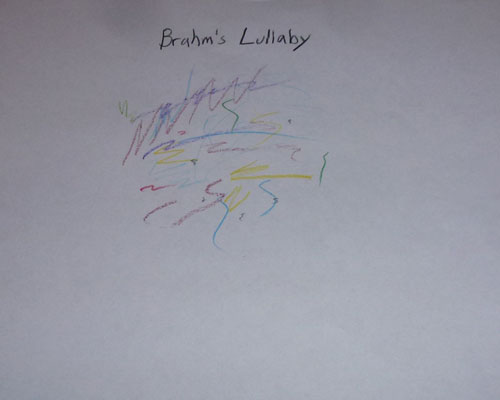 Fanfare for the Common Man (her least favorite; she felt it was ugly except for the unexpected purple bit in the corner)

A couple years ago Ani and Cameron didn’t particularly like each other. Over the last about a year that had changed very dramatically. Ever since they started training to become taekwondo instructors they have become very good friends. Their relationship is completely different now.

They spend hours at the taekwondo school learning and practicing. At home they teach and coach each other and work together to get better.

There’s even talk about them opening their own school together in a few years. Watching their sibling relationship change has been really awesome. For so many reasons we will always be grateful that we signed our family up for taekwondo back in 2013! 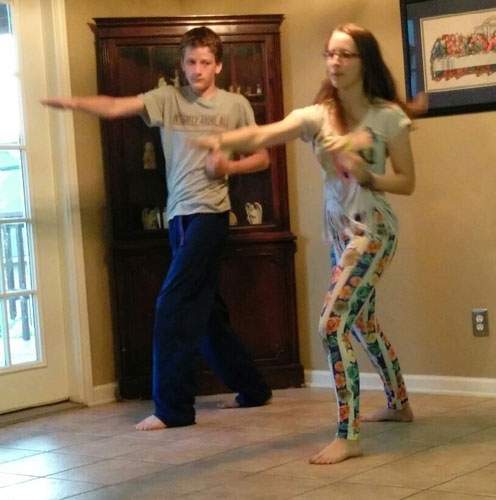 The other day Jamie and I were heading into Target when he pointed out a mud bird nest up near the ceiling of the entryway. Google tells me it was a barn swallow’s nest. 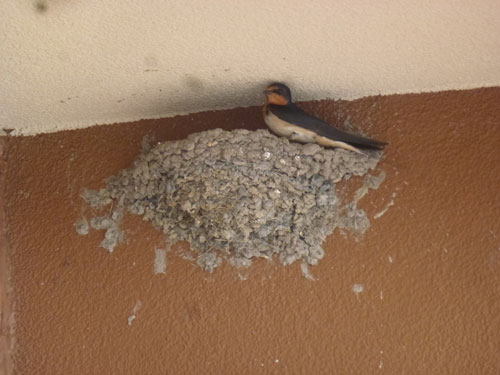