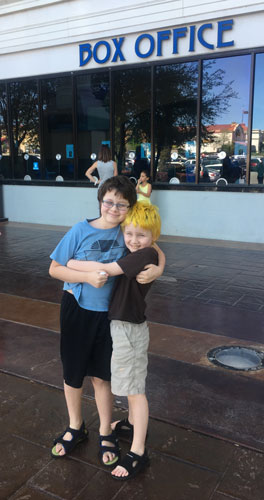 On Saturday the little guys, Jamie, and I got to go see an advance screening of The Boss Baby. Because there is no guarantee of getting into an advance screening (they overbook the theater), I didn’t tell the boys ahead of time where we were going. I assured them they’d enjoy it and if we didn’t get in, we’d find something else to do.

As we were getting out of the car at the movie theater, Adrian asked if we were going to see Boss Baby. He was so excited when I said we hopefully would be. He has seen the ads and had said more than once he wanted to see it. Luckily, we got in (with some parents volunteering to hold their very little ones on their laps, they were able to squeeze everyone who showed up into the theater).

The movie is very cute. The premise is when babies are made (by BabyCorp), each one is tickled and if they giggle like most of them do, they are sent to a family. If they don’t giggle, they are sent to management. They stay adorable baby-sized adult humans by drinking a special formula. Sometimes they need to go to a family in order to carry out a mission as directed by the big bosses at BabyCorp.

Boss Baby (voiced by Alec Baldwin) joins a family with parents who work for PuppyCo and a seven-year-old brother named Tim. Tim absolutely does not want a baby brother and feels like his parents don’t love him anymore since all their attention is focused on the baby. Eventually Tim and Boss Baby must team up with the end goal of Boss Baby leaving their family forever. Tim just wants to be an only child again while Boss Baby wants a promotion, a corner office, and his picture on the wall at BabyCorp.

The story is told by Tim as an adult (voiced by Tobey Maguire) and while he admits he had a very active imagination as a child, he is telling it just the way he remembers it happened.

There were a lot of children in the theater from toddlers on up to pre-teens and, yet, for the entire nearly 1 hour and 40 minutes, the kids were so quiet. They really paid complete attention to the movie. Everyone laughed a lot. In fact, I think the adults laughed more than the kids. The moral was lovely and the end was perfect. The animation was amazing with Boss Baby’s mannerisms being totally adult, yet totally baby-like at the same time.

I highly recommend seeing The Boss Baby. It’s a great family movie. You won’t be sorry.

Note: It is rated PG for some mild rude humor. Usually, it is funny, but there is one point where Tim and Boss Baby are in a dog-shaped bouncy house and they escape through an interestingly placed air hole and so look like they are being pooped out of the dog. That crossed the line from funny to gross and judging by the reaction of a lot of the people in the theater, I am not the only one who thought that.