Ani went to ATA Worlds in Arkansas last weekend. She got to watch our (former) instructor test for his 5th degree black belt and watch some amazing competition. Being there gave her the itch to get back to training.

Cameron is just plain amazing at taekwondo. Last Saturday there was a Daddy and Me board break class and Cameron did a spin heel speed break on a wooden board.

Fritz just finished his third summer swim season. He is not the fastest swimmer, but he loves being in the pool. This year he shaved over 8 seconds from his freestyle, over 13 seconds from his backstroke, and added breaststroke.

Adrian is on the slow path to black belt. He moves up a belt color about once a year. After 3 1/2 years of being a low rank, he tested on Monday for his purple belt and will finally join the high rank group. This means he gets to spar and use a weapon in each hand, both things that he’s really excited about.

We have a new instructor at taekwondo. It’s been a little traumatic losing the only instructor we’ve ever had because he’s just amazing and seen four of us to first degree black belt and one to second degree black belt. He was instrumental in changing our lives. He moved to a school 5 miles away so we could have followed him there, but we decided to give the new guy a chance and I’m glad we did.

Our new instructor is amazing with Adrian. The kid is rather difficult and we know this. But, somehow, things that used to turn into a battle of wills just don’t anymore. We’ve discovered that things Adrian has been taught, he has not learned. I don’t know if it’s from not paying attention or just not wanting to be there so ignoring the instructions. Whatever it is, he has actually been telling our new instructor he doesn’t know how to do things and asking for help. Our instructor then shows him and Adrian can do them. He also ignores certain behavior from Adrian that our previous instructor would engage in a battle of wills over. The interesting thing about that is Adrian will see that our new instructor is obviously and purposefully ignoring whatever Adrian is doing and the kid stops and does what he is supposed to do.

Anyway, our new instructor is very talented and seems to really enjoy working with kids. But he’s so awkward when he’s not doing taekwondo. It’s funny because he’ll retreat to the corner in between classes like he’s trying to hide, but then when class starts or you talk to him about taekwondo he’s animated and not awkward at all. That reminded me of James Roday who played Shawn on Psych. He was so gregarious as Shawn, but any time they had a panel or interview or whatever he was pretty quiet and if they were sitting on a couch, he would always pick up a pillow and hug and rub it through the interview. So I jokingly said I needed to make our instructor a pillow. My friend kind of egged me on a little bit and that led to me making a thing. We’ll give it to him tonight at beginner belt graduation (Adrian’s finally, after 3 1/2 years, made it to the high ranks!).

Ani had physical therapy yesterday morning so on the way home we went to Michaels and got fabric, a pillow form, and a pineapple applique. 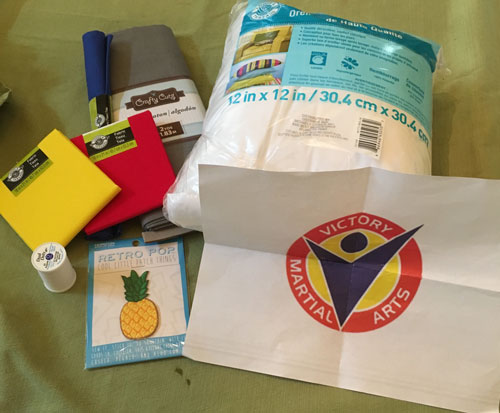 I printed two copies of the Victory logo and cut it up to use as a pattern. 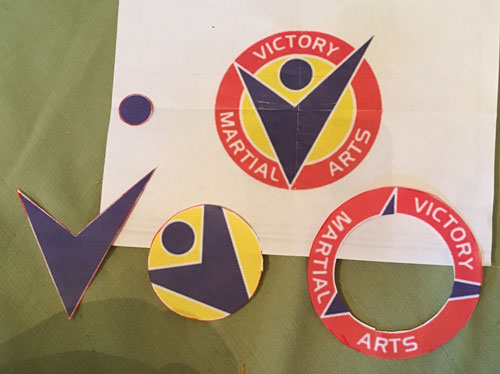 Then I started sewing. My mom does applique stuff all the time. I think I have once before ever. I was pretty happy with how the Victory logo came out.

I made an envelope pillow case to fit the pillow form. I googled for instructions because I literally had no idea how to do it.

I sewed the Victory logo onto the center of the front of the pillowcase.

I sewed the pineapple applique onto the back of the pillowcase as a nod to Psych and the whole reason I even thought of making him a pillow. I stuffed in the pillow form and it was almost perfect.

I added a few more stitches to fix the corners better and I am very happy with it. I just may have to make one for us to keep!

A local mosque invited non-Muslims to fast any day of Ramadan and join them that night to eat with them. For each person doing this, they would donate $100 to the Center for Refugee Services.

We fasted on Friday and headed to the mosque Friday night. They answered all of our questions, let us observe their prayers twice, took us on a tour of the mosque, and fed us a delicious dinner.

It was a great experience and hopefully will make things more clear in the boys’ minds when we study Islam and the Arabian peninsula the fifth week of school next year. 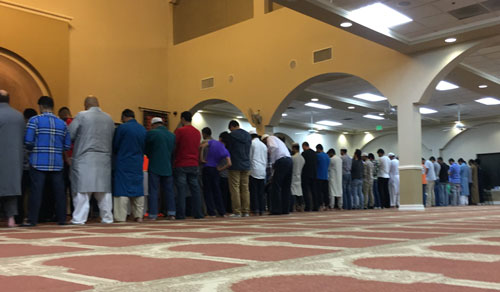 Getting to know others who are “different” is what will change the future. So often those who look different on the surface are really more like us than we ever imagined.

Cameron tested for his second degree black belt in taekwondo on Saturday.

On Monday he received his new belt at the Black Belt Candlelight Ceremony. 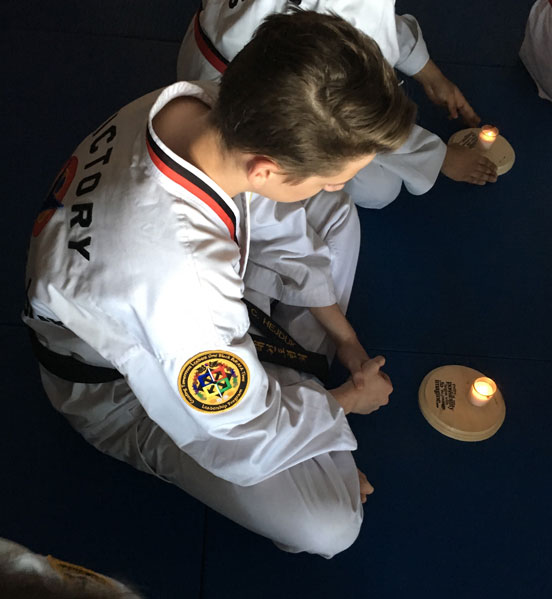 They sat and thought about the journey that has gotten them this far on the path to black belt and beyond.

Then they punched toward their candle flame to put it out (Cameron’s the second in the row).

They each got to come up and receive their new belt from their instructor. 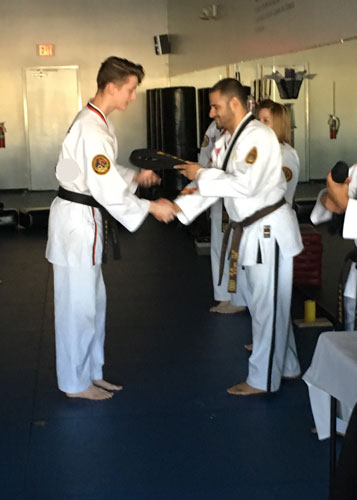 He was most excited to get his new belt because it means that after a year and a half he finally gets to start learning a new form.

The amount of time and effort behind a new belt is huge.

His old belt was pretty much gray now from so much use. 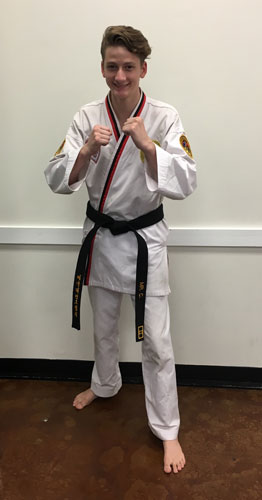 Because of some changes in chief instructors, Mr. Meza is no longer at the location where we go, but he has been our instructor for the last 3 1/2 years (and he’s still close by so we’ll still see him a lot).

The little bit has reached his last year of single digits! He’s 4’3″ and 64 pounds.

But I’ve been very productive during my mostly sitting in my chair coughing state. I’ve been lesson planning and organizing school for next year like crazy. I even got a filing cabinet and hanging file folders (purple because it’s my favorite) and colored manila folders (orange for Cameron, blue for Fritz, yellow for Adrian, green for all of them together).

I’ve got the first four weeks of school almost 100% planned. Only 31 more weeks to go (those are all about 75% planned already so it’s not as bad as it sounds).