After Ani’s car’s ball joint broke, they looked at the other ball joint and said it was about to break as well so we eventually made the decision to sell her car to a junkyard. Imagine my surprise when I went to empty out her car and discovered the place where the front passenger puts their feet was absolutely full of water! 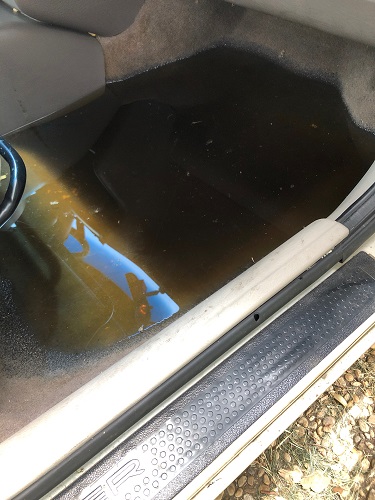 Because the rest of the car was perfectly dry, after our initial confusion as to how this was possible, it dawned on us that the front right corner of her convertible top has always leaked just a tiny bit when it rains. Just a couple days before I found all that water, we had an incredible storm that dumped lots of rain on us over the course of several hours. Apparently the tiny leak became a very big leak during that storm.

So I spent some time bailing water while my best friend entertained me on the phone. It dried out after a few days and now the car has gone on to its final resting place where hopefully it will help someone get a little more life out of their own vehicle.