As of yesterday the babies are officially one year old! 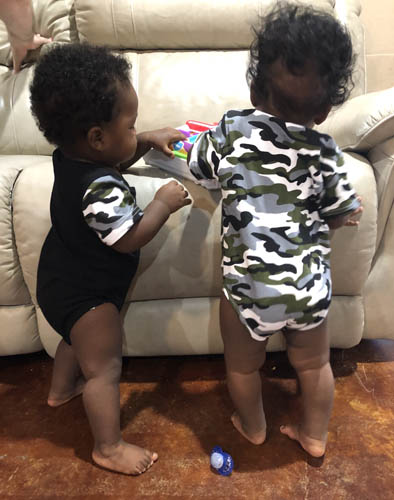 (One week to go until the next birthday…)

All foster kids automatically get Medicaid and WIC. Special needs adoptions continue to receive Medicaid and so can also continue with WIC.

Last week I filled out the paperwork for the kids’ adoptive Medicaid. We had four choices for medical and two for dental. I tried to go on-line to make my choices, but that didn’t work for either of the two I tried, one because it attached him to other family members and wanted me to change their Medicaid along with his and the other because he was “too young” to do it online. So I gave up and mailed the forms in.

WIC has been quite a pain with mistakes they’ve made that have required extra trips to the office and how slow they are when we are there. It’s paid for more than half of the twins’ formula, though, so that has been good. The benefit for older kids isn’t a whole lot and I’m not sure how long the hassle will be worth it.

Dealing with these programs makes me realize just how not user friendly they are. Just how much they don’t truly serve the people they are meant to serve simply by how difficult they make it. It’s no wonder some people quit using the programs or give up while still trying to sign up.

We received the kids’ redacted file in the mail Friday, reviewed all 998 pages of it that evening, and signed and returned the form saying we had done so on Saturday.

Most of it was stuff we already knew. There were a couple things in there that were new. It was quite interesting to see it all laid out.

I think that’s the last checkbox before adoption. Now we just wait for enough time to go by before they can be officially ours.

When kids are first placed there’s a bit of an adjustment period as they learn the rules and routines and you learn how to fold the extra kids into your life. It can take a bit for everything to iron itself out. Those first weeks to months can be really crazy.

We’ve reach the calm after the storm adding E&M to our already giant family.

It took two or three weeks after getting the babies. They were only two months so the adjustment period with them was all about us learning how to deal with newborns, bottles, and cribs. It took a sold two months for A&N. A had an especially rough time adjusting. It was pre-COVID so we were still having weekends with E&M and I think that was really difficult for A especially.

We’ve had E&M for about 5 weeks now and it’s been a much easier adjustment than I expected. They really miss their grandmother, but they are so happy to be here with their little brothers. It’s not nearly so chaotic as it was the first couple weeks. There will always be some amount of chaos as long as these kids are all so small, but it’s just not as chaotic all the time as it was at first.

A few weeks ago Fritz had his annual checkup at the eye doctor and, as usual, his vision was worse. He gets more nearsighted every year. So the doctor gave us a brochure about Ortho K.

After thinking on it and getting Fritz’s input, we decided to go with it. Ortho K is making it so Fritz only has to wear glasses part of the time currently and eventually he won’t need to wear them at all.

Last week he had tons of measurements and tests done on his eyes. From those, he was fitted with a pair of contacts that he only wears when he is asleep. He’s worn them two nights so far. 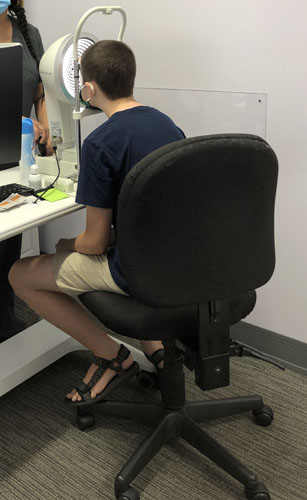 They reshape his corneas while he sleeps. He saw the eye doctor yesterday morning after wearing them the first night. She was delighted with how much his vision had improved in just one night. If he was old enough to drive, he would have been able to without corrective lenses already. Compared to what he started with, that’s significant improvement.

This morning the difference wasn’t quite as impressive, but his vision was even clearer than when he took them out yesterday. Over the course of the day, his vision worsens and he started wearing his glasses again about 3pm yesterday. It’s kind of a weird transition period right now only needing glasses part time and his glasses not making things totally clear because his eyes never get even as bad as last year’s prescription over the course of the day.

He should reach perfect vision that holds all day within two weeks. At some point he’ll be able to only wear the contacts every other night. After long term use, the correction generally holds for 1-3 years of not using the contacts. Many people who used Ortho K choose to get LASIK once they are old enough.

It’s really very cool and kind of wild. Fritz is loving not wearing glasses and still being able to see. I’m glad the eye doctor told us about it!

We’re doing pretty good getting the kids up, dressed, fed, hair done, teeth brushed, and out the door each morning. They usually wake up about 6:30 and I usually get them dropped off at daycare/preschool about 8:15. It really takes a good hour to get them all ready.

When school starts in two months I’m not sure just how we’ll do it. E&M will be at two different schools. Since we don’t have a choice in that (no pre-k at our zoned elementary school), I’m not sure if I’ll have to get her there or if she’ll be bused from E’s school. I need to check on that. School starts at 7:30am for elementary kid so if I have to drop them both off at their own schools, that’s going to be rough.

I haven’t decided if I am going to get E&M ready, take them to school, and go back for A&N (who don’t have to be to daycare/preschool at any specific time) or if I’ll get all four ready and drop the big ones off and then the middle ones before going home to finish getting the babies ready for the day. I’m hoping we won’t have to start getting up at 6 instead of 6:30, but that just may end up what we have to do.

I guess, like everything else with this adventure, we’ll figure it out as we need to.

The youth in our ward were given a quarantine challenge to help keep them busy this spring/summer. One of the things on there was an n course meal where n is the number of people in your family. We added in Cameron and ended up with 14 courses. We had our meal yesterday afternoon. It was both fun and delicious! 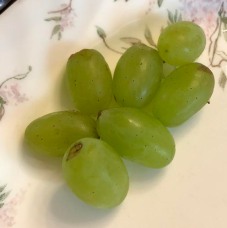 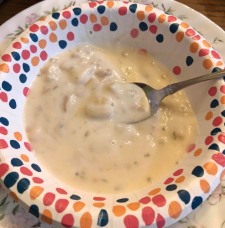 (carrots and dip by Adrian, cheese cubes by A, Grapes by E, New England Clam Chowder by Baby B) 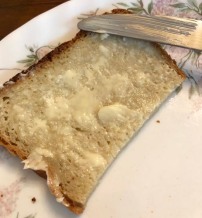 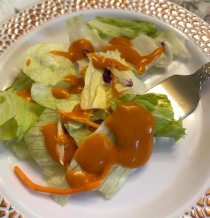 (bread and butter by Fritz, applesauce by Baby A, sherbet by N, salad by Jamie) 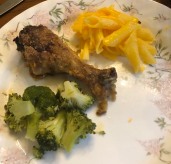 (buffalo cream cheese celery by my dad, lemon friend chicken and broccoli by my mom and mac and cheese by Adrian, brie and crackers by Ani) 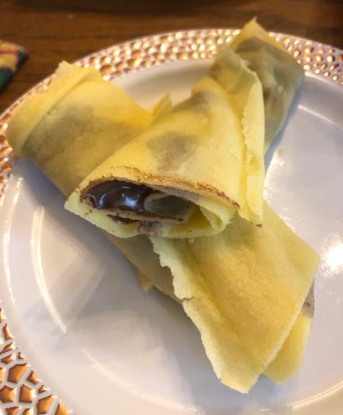 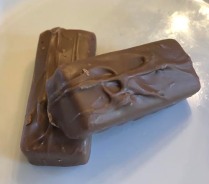 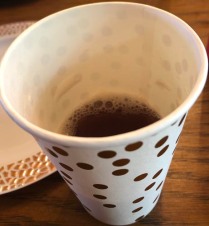 (crepes and nutella by Cameron, Milky Ways by me, and sparkling cider by M)

Twenty-two years ago today Jamie and I were sealed in the Washington DC Temple. We’ve been married more than half my life and are getting close to half of Jamie’s, too. Crazy how fast that time has flown while, but also crazy how much we’ve done in those years.

N has eczema. We were not sure we could handle his skin. We’d seen him multiple times before he came to live with us. He was red and swollen. He was very itchy and scratched himself until he bled often. His skin kind of scared us.

The way his skin looks today doesn’t look at all the way he looked when we first got him. He saw his dermatologist on Friday and she was so happy with how great he looks that he doesn’t have to go back for a whole year.

So what do we do?

Well, we discovered his eczema gets worse when he eats gluten. It was pretty much an accident that we figured this out and if so many of us were gluten free already we never would have. I really think taking him off gluten has helped his skin the most.

We also found he scratches more at night if he’s played outside in the pollen and doesn’t get a bath before bed. So now we bathe him every night to get that pollen off him. That really helps with the scratch until he bleeds thing.

After his bath he gets gel rubbed into his still damp skin two or three times a week and gets rubbed with Aveeno eczema therapy cream every night and every morning.

It takes some work, but it’s not nearly as difficult as we had feared (especially since we already are used to making gluten free food).

Smaller on the Outside
Blog at WordPress.com.
Loading Comments...