Cameron assembled a balance using two baby bottles, a yardstick, and some twine. We quickly figured out that Cameron holding it while I held the candle was not going to work. Cameron got the idea to hang it from the chandelier. That worked perfectly. Cameron held the lit candle under the mouth of the upside-down baby bottle. That side of the balance went up showing us that hot air is lighter than cold air. (The lights are off because Adrian said if we were using a lit candle it needed to be dark in the house.) 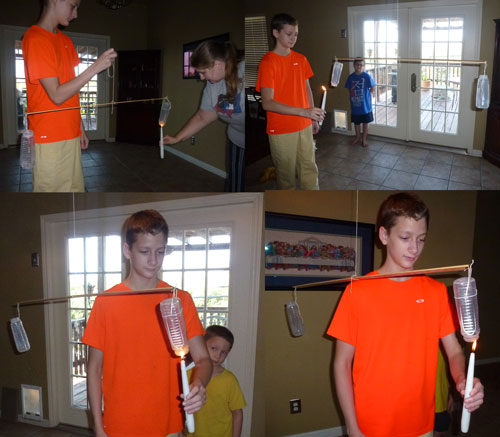 One experiment failed miserably. We put a funnel in a soda bottle, sealed it with clay, and poured water into the funnel. The water was supposed to stay in the funnel, but instead it just poured right into the bottle. We discussed how it was supposed to have worked and guessed at reasons why it didn’t. 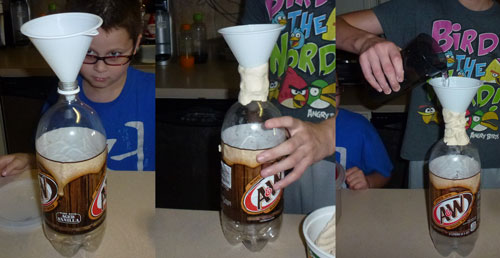 We set up a system with a large empty bowl and a smaller mixing bowl filled to the brim with water. Then we submerged objects we wanted to measure completely in the water allowing it to spill over the edge of the mixing bowl into the larger bowl. Then we poured the water caught in the large bowl into a measuring cup. This told us the volume of the object we were measuring. 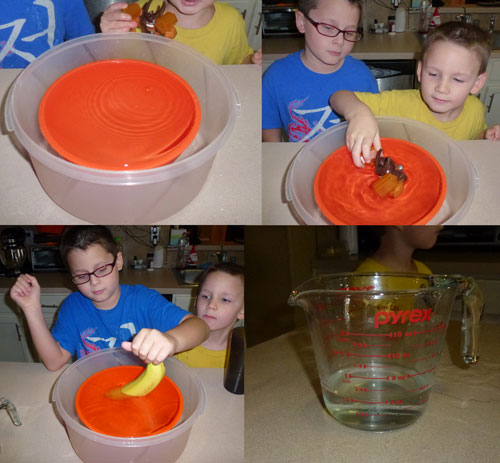 We had so much fun with this experiment that the boys decided to find out the volume of their hands. 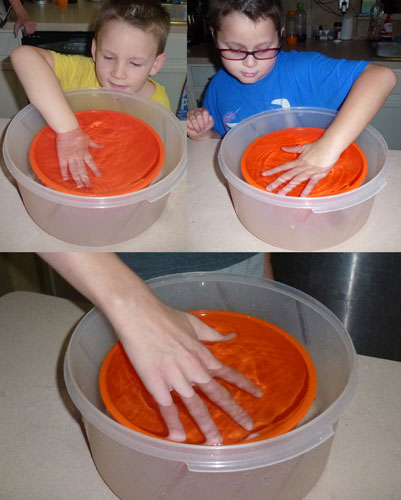 We put a paper towel in the bottom of a cup and pushed it down in the water. The paper towel stayed dry because the air stayed inside the cup. Then we tilted the cup to the side while pushing it into the water so the air left the cup. The paper towel got soaked. By doing this, we proved that air takes up space even when we can’t see it.

We did a couple air pressure experiments. For the first one, we put a piece of paper between two books and blew underneath the paper. This results in the paper being sucked downward toward the table. 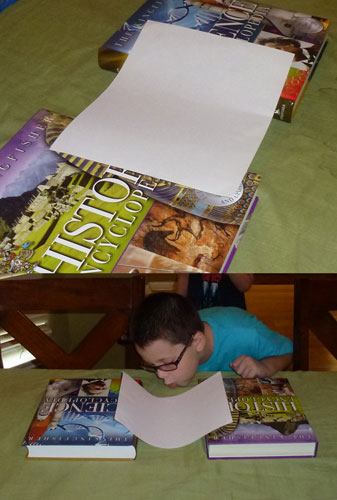 For the other one, we blew up two balloons and tied string to them. Then we held the balloons up using both hands and blew between them. The balloons instantly were sucked toward each other.

We made a hovercraft by cutting off the top of a soda bottle, cutting a hole in a disposable plastic bowl, and taping the soda bottle neck in the hole. While it was being put together we were pretty sure there was no way at all that it was going to work. We were very pleasantly surprised when the hovercraft worked perfectly. We blew in the soda bottle neck and the bowl lifted off the ground very slightly and moved around. 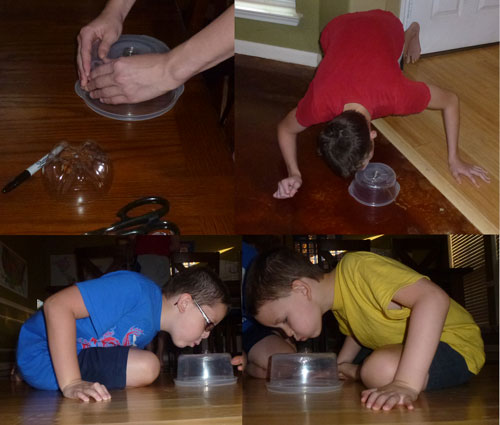 Another day we used the soda bottle top and some plastic kitchen trash bits to make more hovercrafts. We guessed which would work best. The pie pan top won (Cameron and Fritz chose that one) followed closely by a small Noosa yogurt container (Adrian picked that one). We were thrilled that our additional hovercrafts all worked and some worked even better than the first one. 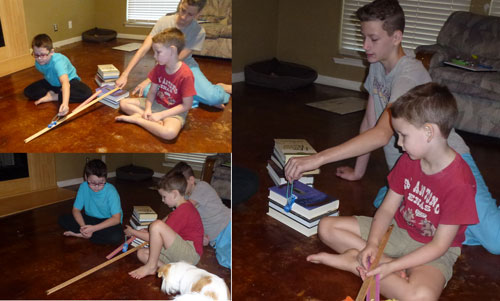 We put a balloon with the neck cut off onto our little funnel. Then the boys took turns sucking in to show air pressure is the same no matter what direction the funnel is pointed in. 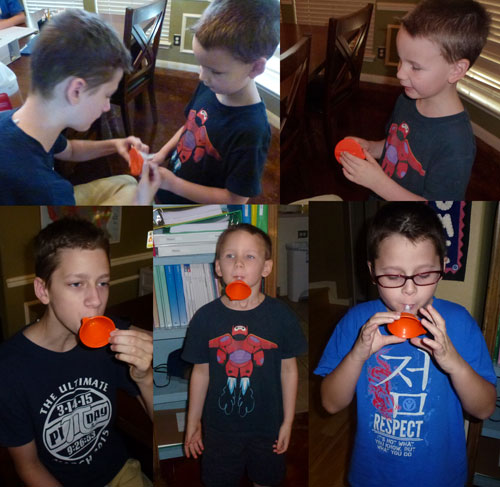 We put a lump of cement in a juice glass and covered it with apple cider vinegar. A few hours later the cement was starting to crumble a bit. We’ll leave this one for a couple more days to show how acid wears down cement. 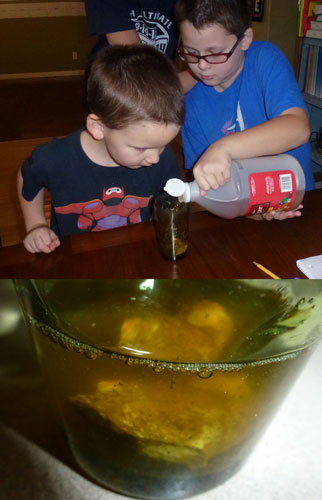 We filled a cup to the brim and placed a piece of cardboard on top. Cameron then carefully turned the cup and cardboard over and let go. The air pressure kept the cardboard in place. This one especially delighted the little boys. 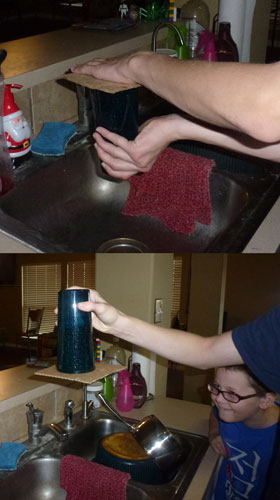 We crumpled up a piece of paper and left another one flat. The boys then dropped both at the same time and discovered that the crumpled piece hit the ground first because the wind resistance was greater on the flat piece.

2 thoughts on “Some Science Experiments”